We had a Music job-a-like, back in March. One of the teachers from Suzhou brought some really scary resources. Scary as in… so amazing that she suddenly turned into some sort of goddess in my eyes. Each one was a PowerPoint of her entire unit. Title pages. Criteria. Deadlines. YouTube embedded videos. Worksheets. EVERYTHING. I was overwhelming. When I looked at these units, I felt like a first year teacher again. Then, I questioned how we can be working effectively through the creative cycle if the unit is so perfectly planned out. Where is the space for innovation, creativity, and teachable moments?

Fast-forward to the summer. Sitting in a trailer (caravan) with no internet access, I decided to go through my own units and see if I couldn’t “Power-Point” them (Power-Point has become my verb). It was pretty easy at first because I already had all the resources – I just had to drag them in. It was quick work, and I was feeling pretty proud of myself. However, once I started, I began to notice small problems. Some tweaks were needed to my units. Some lessons needed to be moved around. New activities. I found myself doing almost total overhauls of my tried-and-true units. And then I forgot about them as the summer went on and we began our transition back to China from holidays.

Cue the start of school. My main laptop died, but these Power Points were sitting in the cloud. I grabbed a loaner and opened up… organised, fun units. They are based on the Opus music textbooks. My grade eights are doing film scores at the moment. Before, the unit tended towards being more of a music appreciation unit before diving more into the practical aspects (Criterion A first, then B). However, this teacher from Suzhou advised us to think of each lesson as a workshop, instead of a lesson, and so I decided to put something practical and fun into every lesson. We started off with “The Last Emperor,” which shows how music can set a film within a place and time. Reading (Criterion A). Then I transcribed a pentatonic piece for flute, violin, viola, clarinet, and trumpet and gave it to the kids in the class who could play instruments. Everybody else had either Chinese percussion instruments or G pentatonic xylophones. The class was really engaged and interested. I did a Kahoot quiz afterwards and found that the kids had pulled knowledge out of their performances. E.g. one of the questions asked which scale the film theme was based upon, and the majority knew it was G pentatonic because they had been pulling off their ^4 and ^7 bars every class.  When I said we were moving onto “James Bond,” a loud cheer went up throughout the room. Now, I have the same instrumentalists in a practice room learning the orchestra part and I’ve got the rest of the class learning the melodic motif on guitars. We’ll put them together on Monday. The kids are having fun, and so am I.

My experiment has been a success, and I’m going to continue ‘Power-Pointing’ the rest of my units for semester 2.
Benefits:
– Everything is in one file and I don’t have to go searching through folders
– I can walk in the door on Monday and know that I’m ready to go (even the YouTube videos are embedded and working properly)
– It’s very easy to save my work to the cloud and to Atlas, because it’s only one file
– I can screenshot or PDF the day’s lesson and upload it to Seesaw so that the kids have our lesson notes before they walk into class. This is great because parents can see what their kids learned in the day’s class and then watch the video of them performing and students needing support will automatically have the notes ready for careful reviewing
– It’s pretty. As I’ve mentioned before… big kids like things to look nice as well.
– I can upload their exam study guide the first day of class, and since it contains a vocabulary list, it helps the English Language Learners in their English for Cognitive Communication lessons.

The only thing that I’m not doing is giving timelines. I still need the flexibility to go through the creative cycle at the class’ pace.

Here are my slides from my grade 10 unit, ‘The Elements of Music.’ 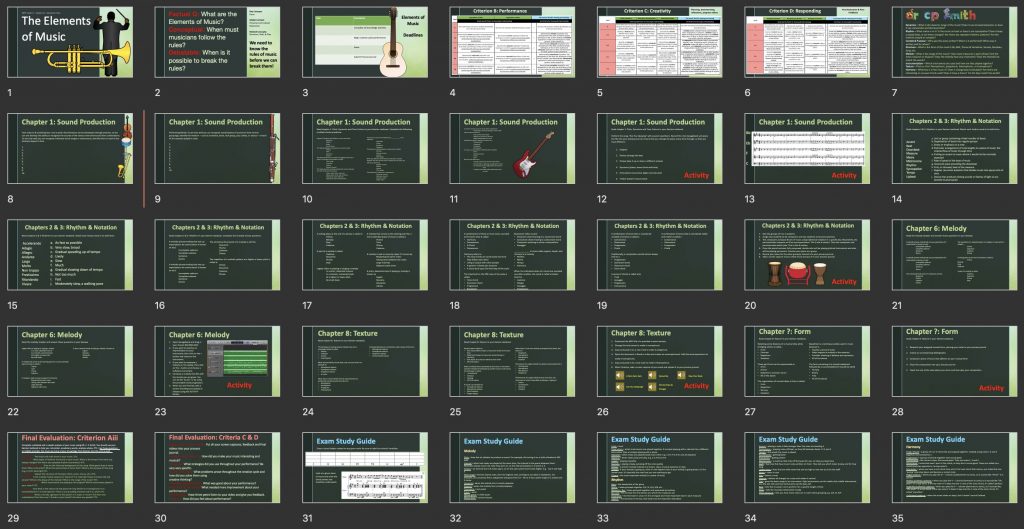