Smooth sailing in your PYP, MYP & DP Music Classes for those in uncharted waters

My school is incredibly focused on saving the environment, which is good and noble. It means that we are always focused on whether we need to print, and if so can we use recycled paper? This is problematic when I want to do 5 minutes of theory drills at the beginning of every lesson. Our photocopier quota ticks by even when using recycled paper.  I started investigating online programs that could practice theory drills, assess students, be fun, and save my photocopy budget.  My first response was Nearpod, but it’s not especially fun and it doesn’t have enough capabilities. Then I stumbled upon Kahoot and I was hooked. Were the students hooked? 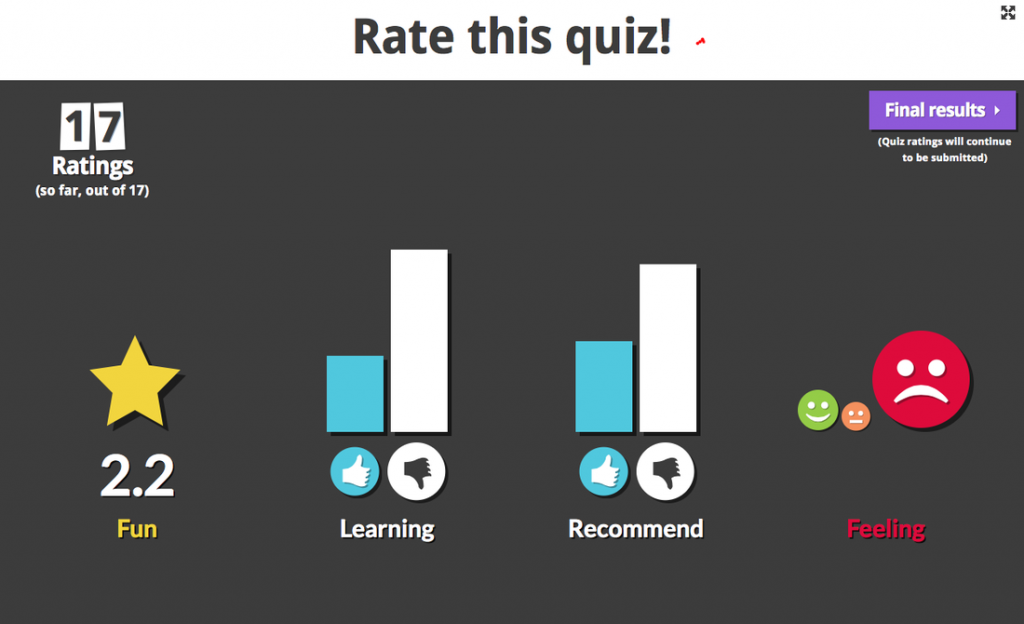 Let’s look at their Kahoot feedback to me. If you looked at just this picture, you’d think I was torturing my students. They hadn’t had much fun, they didn’t learn much, if anything, few would recommend the game to others, and the majority of the students felt unhappy afterwards. But the results in the classroom? They were literally begging me to play it again. I mean – literally BEGGING.

During the game, there were shouts of joy whenever they go the answer correct. There were exclamations whenever their names appeared on the leaderboard.  When the game was finished, they all started yelling and begging me to play it again.  Did they learn something? Absolutely! The first few questions about chromatic and diatonic semitones was awful, but by the third question, they were doing better, and by the last question they were complaining that the questions were too easy.  They definitely learned how to quickly and efficiently recognise the two types of semitones. Would they recommend it to anyone? Well, the other classes came in and said, “We heard you played a fun game… can we play it too?” Fun? The class was filled with laughter.  I asked why the were silly with the feedback and the answers were obvious — they are in grade 6 — they are inherently silly.  (LOL)

I’ve made three quizzes so far, mostly for my DP music students.  I have a quiz on alto and tenor clefs, one on identifying semitones and whole tones using a piano keyboard, and another one identifying chromatic and diatonic semitones.  For the younger students, I have favourited games made by other teachers, including naming notes and note values. The level of enthusiasm and engagement is equally high throughout the grades, with my grade 11s just as excited about the games as my grade 6s. I had initially worried that the games were more fun than learning (as often happens). However, by watching the achievement results growing throughout the game, I saw how they were learning and adapting as it continued. When I downloaded the results, I could see specifically how the students became better and better by throughout; by the end of the game, the students were getting perfect.

I’m going to continue with Barbara Wharram, Fux, and my other ‘proper’ theory sheets because I need to know that my students’ learning is progressing chronologically and systematically. However, I think I’m going to always start with a game whenever we learn a new concept… to use it as both immersion / hook and learning.  My grade 9s are currently drawing major scales, marking the tonic, subdominant, dominants, semitones, etc.  I’m going to experiment with this program and see how I can use it to teach the concepts before the kids have to sit down to their practice pages. In time, it’d be cool to get the kids to make their own game quizzes for their peers.

Here’s a screen capture I made of Kahoot. If you are in China, you’ll need a VPN to access it (sorry about that).