A good answer is, “Using differentiation is best teacher practice.”  This is true. However, the best answer is, “Because my class couldn’t function if I didn’t differentiate.”

You know the saying, “Necessity is the mother of invention?”

In my class, “Necessity is the mother of differentiation.”

Why is differentiation important? Take a look at my typical class roster…

My first step is finding out what the kids know and can do.  Often students will say they can play piano, but once they sit down you find out they are at the most basic level and can’t handle the demands of an ensemble. So I start with “Karate Belts.”

Recorder Karate is a record method written by Barb Philipak using public domain sheet music.  Students start with the “white” belt, which aptly is “Hot Cross Buns.”  The pieces get progressively harder until they reach “black belt,” which is “Amazing Grace,” a piece with a large range and challenging rhythms. 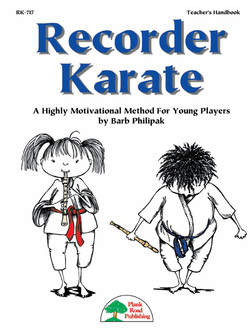 I now use this book as a prompt for my differentiation. Rather than going through the belts progressively, I give the students 2 classes to reach the highest belt possible on any instrument of their choosing. Obviously if my prodigy violinist plays black belt perfectly, and then shows off with a Paganini caprice, I’m going to count all belts as completed and give them something harder.

I use Numbers to record where the students are in their “belts.”  This book is reported to be a “highly motivational method” and it’s very true.  The students get very excited to see what belt they have achieved and stay very focused on obtaining their next belt.

Differentiating Scores - Everybody in the Ensemble Sounds Great 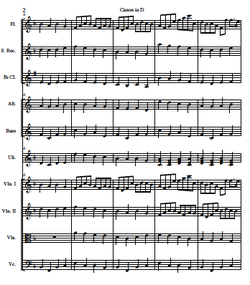 First of all, I need to make sure that everyone in my class has basic instrumental skills, and do it quickly because I only have students for 13 week blocks, and I still need to get them through the creative cycle at least once.

Step 1: Use karate belts as a pre-assessment to figure out what level kids are at.

Step 2: Find a piece of music that can be arranged to have easy, medium, and hard lines. Make sure a range of skills are taught. E.g. in the Canon example, the ukuleles have to use both finger-picking and strumming.

Step 3: Assign instruments as needed.  For example, an intermediate student might get the challenging melody line. Or perhaps the very experienced violinist can move to viola, or the cellist can move to double-bass.

Remember – Differentiation is about challenging the advanced kids as well as supporting the struggling kids.
Video the students as they learn the music together.  This not only improves their playing skills, but it “models” how to effectively use the creative cycle before they’ll need to go and do it by themselves.

And here's how it sounds all together...

This is a sample of a progress video made of “Canon in D.”  This is by far not a polished performance.  The video was made at the end of class and the students’ homework was to watch it and make an evaluation of how the group sounded and what else they could work on in the upcoming class. It’s a good example of differentiation because of the instrumentation.  E.g. The girl playing the cello in the video is a violinist who wanted to try something different.  The other girl playing violin is playing a harder line than she is normally used to.

“Making the Difference: Differentiation in International Schools” was the workshop book used when Bill and Ochan Powell came to our school to run sessions on including differentiation.

I used to be a purist. I used to hate TAB because I wanted students reading bass clef notation. Even kids who barely spoke English, had no music background, and were only going to be in my class for a trimester once in a three year period. Then I realised that was just not going to happen. That’s when I started moving to meeting their needs. For example, If kids were 100% beginners on the bass, I’d just have them playing open strings and simple roots. If they had some experience, I moved them to TAB. Once they were intermediates, I started moving them to traditional notation. Musical Futures International advocates something very similar. In fact, they have these really cool Power Points in which animated chord chords show the piano, bass, ukulele, and guitar chords moving with the lyrics.

Here’s something that was controversial (to me), but once I wrapped my mind around it I really liked it. I have a guitar student who is a purist. He believes that students need to start off with the proper chords on full sized instruments because they need to stretch their hands and get used to quick changes. That’s definitely true… for guitarists who love to practice for hours a day and will probably take grades 9 -> music. However, for my grade 6 who is taking music as an elective, and only has two classes available, learning the guitar in that short amount of time is very challenging. Musical Futures International advocates putting a piece of sponge under the first three strings of the guitar, then teaching the students the simplified chords. At first, this bothered me because I didn’t want to teach the students something incorrect and then have to fix their hand positions later on (a.k.a. perfect practice makes perfect, right?). However, I realised that if the students still used the correct fingers in the simplified chords, then it’d be easier to move to the real chords later. 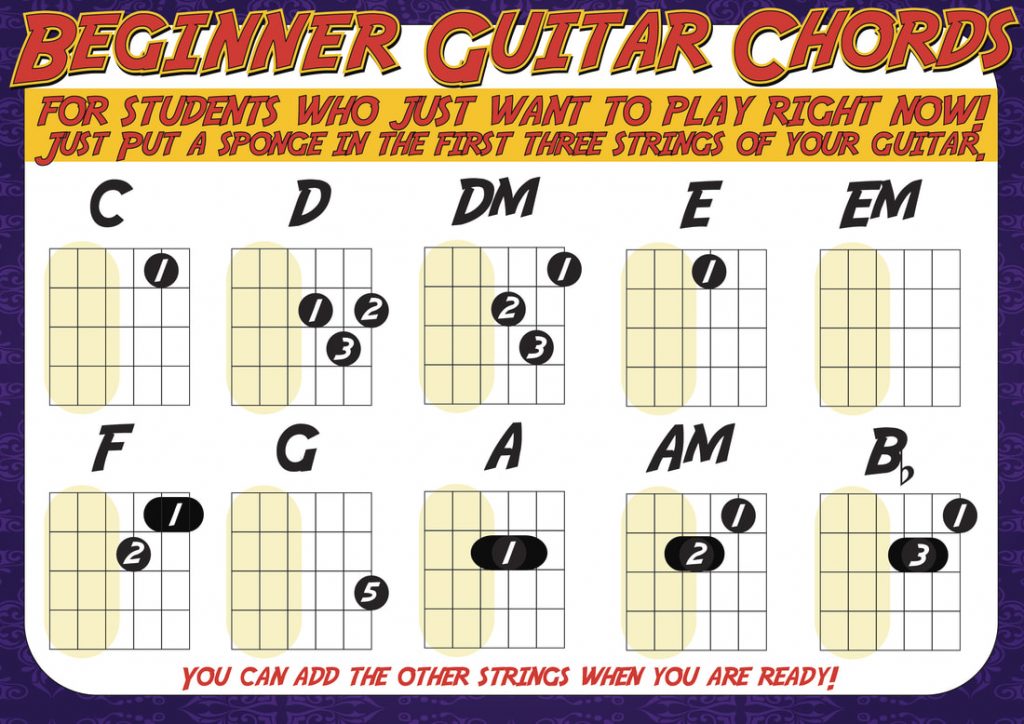 You’ll see what I mean with G major. If you were treating the guitar like a ukulele, you’d tell the student to use their 3rd finger here. However, this is just scaffolding for differentiation. This is not actually how we want to permanently teach the guitar. When it comes time to learn the real chords on the guitar, we are going to want to use our 5th finger for the G pitch. That’s why when we are using this easy version, we are still going to keep our 5th finger down. It looks and feels weird, but it’s a good habit to use.

Here’s how I differentiated for a learning support student.  The unit was protest songs, so his group chose, “American Idiot” by Green Day because it explores the idea of the government propaganda. (The sheet music is a clean version). The power chords were too difficult and all the other instruments were taken, so we were left with the guitar.

I had the student play on an electric guitar with capo 1.  His instruction was to play the opening riff using tabs, whenever he heard it.  When the chorus came, he switched to his three chords, playing each for eight beats. The last repeat said, “N.C.” which meant “No Chord” because the riff started again.

In cases like this, I always support as much as possible. For example, sometimes I’ll take a screencast of me playing with Band-in-a-Box or Finale, so the student can see the sheet music scrolling across the screen while also watching how my fingers are moving. 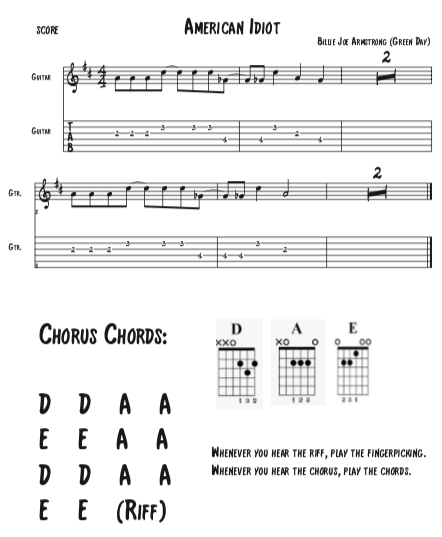